It’s been a while since my kids and I have posted a review and that’s because we were reading through the entire series of Shannon Messenger’s Keeper of the Lost Series.  We finished Book 5 in June and now we have to wait until November for Book 6!

We highly recommend this series to kids of all ages (7-93).  I read it to my 8 year old son, Owen, and 12 year old daughter, Katie Rose, and they both loved the books and were equally engaged.

The series begins with Sophie Foster, a telepathic 12-year-old who has never fit in, discovering she’s actually an elf, raised by humans, who’s been genetically modified to secure the elves’ future. When she’s reclaimed into the elf world, she’s immediately embroiled in mystery, danger and adventure, as she attempts to uncover the secret of her existence and fight the forces that want her out of the way forever.

The setting: The setting of the books is exquisite. The world of the elves is a beautiful, magical place, with unlimited abundance and finery in their clothing and homes, as well as a deep connection with the beauty of nature.

Characters:  Sophie is a wonderfully strong, brave and selfless.  She deals with her share of difficulties, some of which even had mom tearing up reading.  We also adore her friends, who each bring a unique flavor and form true friendships that are tested with each new adventure.  Katie Rose’s favorite character is Bianna and Owen and I love Keefe because of all his jokes.

The stories:  Each book has its own story arc as part of a larger overall story.  Owen’s favorite was the fifth book, Lodestar because it has more action.  Katie Rose can’t pick because to her it just feels like one big story.

I highly recommend this series to middle grade readers, or to anyone who loves a great fantasy series with complete world-building, great characters and awesome adventures. 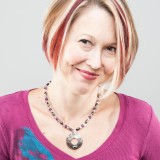